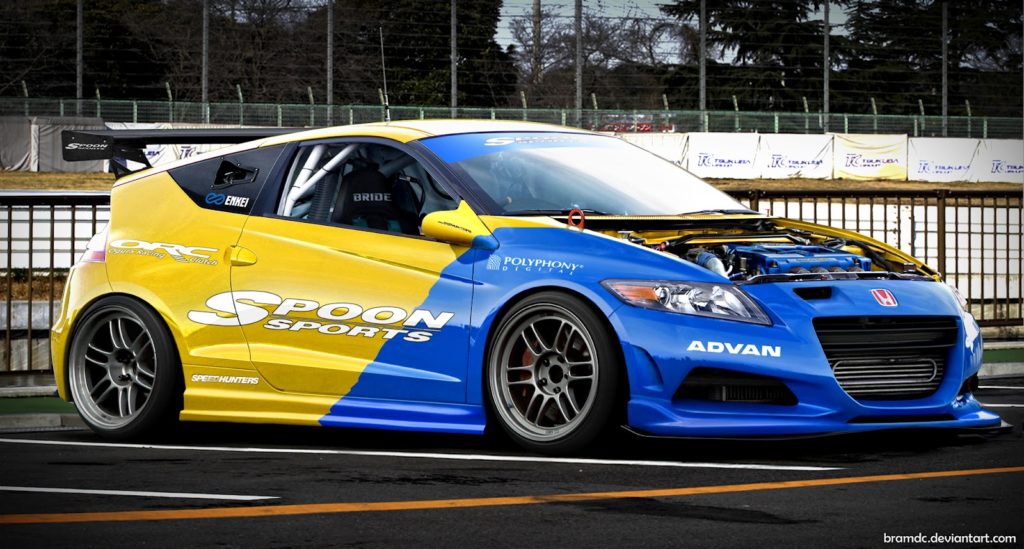 Inevitable in the right word to sum it all up. With the emergence
of high gas prices, the car industry as we know it has adjusted to this dilemma;
car manufacturers have built and sold Hybrid cars which effectively reduce cost
by combing an electric motor to a petrol powered motor. In layman’s
explanation, petrol motor charges the electric motor, once charged it takes
over the duty in running the car. The cycle is as simple as that. For years, we
have been exposed to the usual hybrid cars such as the Prius, and the USDM
Camry running the streets, but this time, we have Honda introducing the CRZ as
a sport compact, tuned by Mugen, Spoon and HKS and a lot others as the next big
thing in the tuning world. To put it simply, have you ever imagined a good 10
years ago that people would be building cars around a hybrid platform? For a
lot that would be sacrilege, and many would question, what possible performance
can one get out of a hybrid platform? A testament to this is Spoon’s CRZ which
was built and even being raced as one of their flagship cars. In due time, we’ll
be seeing more of this, that the tuning world as accepted such as a norm. And by the way, how many times have you seen that CRZ and slammed Prius at your usual GT?
When we say green tuning it’s not always about the hybrids,
on a larger scale and should I say in its current state, green tuning is about
smaller cars with very good handling and small displacement engines. If you’ve
probably noticed, the Honda Jazz/FIT and the Toyota Yaris are one of top tuner cars nowadays. With lots
of parts, a very efficient engine, a spacious interior, and good handling, it’s
easy to understand why people have easily learned to love it. We all know that
a lot of individuals have stuck to their EGs and EKs, Evos and Silvias, but if
you think about it, the most accessible tuner car nowadays is the Jazz/FIT. It’s
a prime example of how fixing up cars have evolved, on how gas prices and
trying to preserve the environment has greatly affected the kind of cars that
we drive, or the kind of cars that we build.